As part of the BWSEVATU's annual social activities, I had planned a group trip to the Dry River, west of Harrisonburg VA.  Club member Larry Wesling, how was already camping in the Shenandoah National Park, had warned me that the Dry River, was, in fact, mighty dry due to a lack of rain.

Nevertheless, I had the time to travel so, after an unsuccessful morning trying for speckled trout on the Lynnhaven River (with 30 mph winds), I hopped in the Outback and headed west.  Traffic was a bear getting out of Hampton Roads so I didn't get to our Rapidan River rendezvous point until late in the day.  Pavement on the Quaker Run Road it eventually turns to dirt along the Rapidan River Road - a deeply eroded road with axle-breaking gullies.  I picked my way up the road, and eventually found a spot to pull off the road and fish.  I lowered myself down a steep bank and the river and a setting sun were there to greet me. 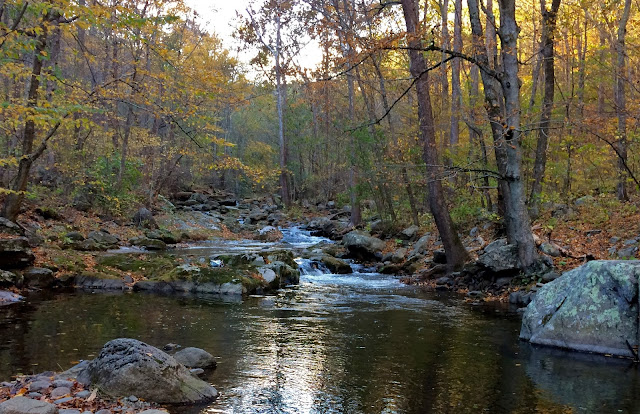 I only fished for about 10 minutes when Larry passed by.  We exchanged greetings and he proceeded on to his campsite at Lewis Mountain.  Snagging line and feeling anxious about the ensuing dusk, I fished halfheartedly for maybe 15 more minutes before I packed it in and started picking my way down the mountain and through all the gullies before dark.

I stopped at the Montaineer Cafe in Madison, VA for dinner.  It's a family diner type of place with simple fare, cheap prices, and friendly service.  I would my way through Standardsville and then up Route 33 to Skyline Drive.  A right turn took me north to Lewis Mountain.  Thank goodness Larry let me join in on his campsite because Lewis Mountain and the rest of the surrounding campgrounds were full!  I erected my Big Agnes Copper Spur UL tent, brushed teeth and went to bed.

The next morning I awoke early and set off for breakfast on the way to the Dry River.  A beautiful Shenandoah sunrise begged me to stop and count my blessings. 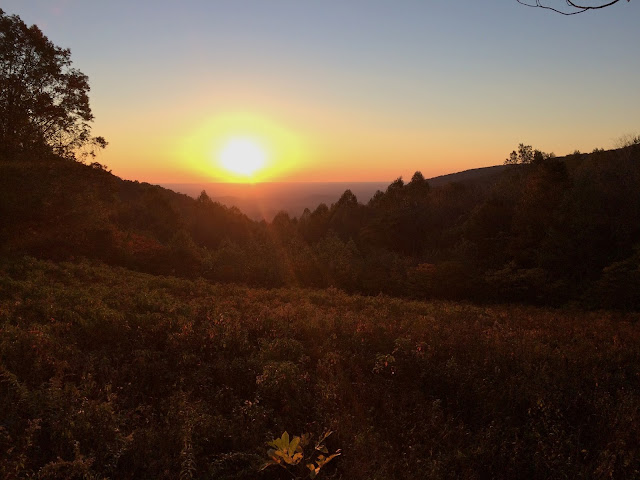 I ended up getting breakfast at a truckstop in Harrisonburg before heading west on Route 33 towards the Dry.  Larry was right.  As 33 paralleled the river, I could see it was way down.  We met in the last parking lot in the George Washington and Jefferson National Forest before climbing the mountain on our way to WV.  We suited up and headed down the path towards the Switzer Dam and the tailwater release into Skidmore Fork.

Larry and I walked the short mile up to the dam and worked the pool just below the release.  No fish rising, and because of a lasting drought, the flow was muted.  We moved down stream.

I put on a bead-head pheasant tail nymph and it started to produce right away. 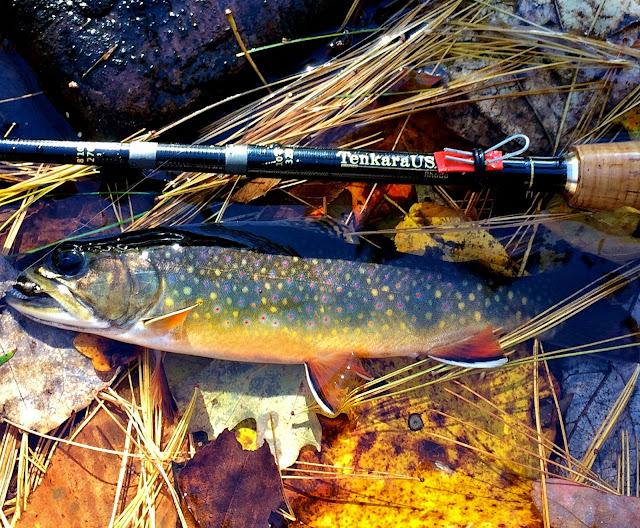 I've become a Tenkara convert for these small, tight, Shenandoah streams, and my Tenkara USA Rhodo is a nimble tool for these short-cast situations.

Their fall colors are stupendous!

Around 3 pm, I started to see rising fish.  Looking up, you could actually see swarms of mayflies mating.

This is one of many spots where fish were rising.  It's funny, with no trail markings or paths, I end up bushwhacking to this spot time and time again.  I keep an old worn fleece Patagonia jacket to pick through the greenbriar. 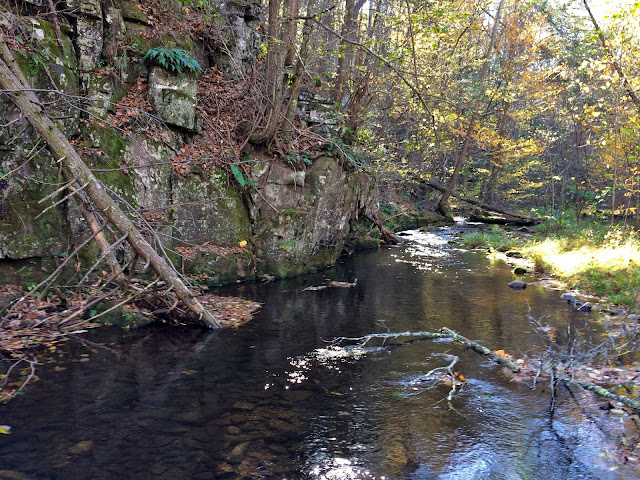 Little brookies smashed my parachute Adams - one leaping several feet in the air as he burst through the surface film on the take. 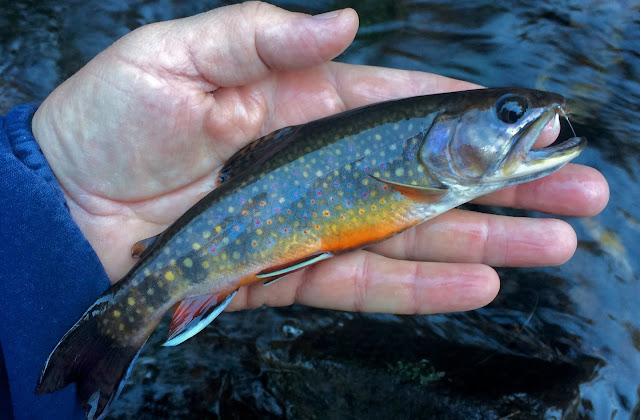 Larry and I ended up only fishing the top half or top third of the Skidmore in a whole day's fishing.  What a bountiful and fun stretch and a savior for the droughty conditions of this fall in VA.

Posted by KevinDuBoisPhoto at 6:29 PM No comments:

KevinDuBoisPhoto
I am trained as a Marine Biologist and am a certified Professional Wetland Sceintist and Professional Wetland Delineator. I am a past President of the Virginia Association of Wetland Professionals. Over the past 27 years, I have worked as a fisheries biologist, sensitive land acquisition specialist, wetlands biologist, and USFWS endangered species biologist. I am the co-founder of the Virginia Coastal Fly Anglers, and member of the Bill Wills/Southeast Chapter of Trout Unlimited. I am a member of the Tidewater Appalachian Trail Club and volunteer on trail maintenance, cabin maintenance, and as a guest speaker. I also own and operate Coastal Explorer, a multifaceted ecotour company offering guided fishing trips and walking and kayak ecotours. I am a published writer and photographer with a growing library of fishing, outdoor, coastal scenery, volunteerism, and other stock photogrtaphy and a client list that includes: Saltwater Fly Fishing magazine, Fly Fishing In Saltwaters magazine, The Official Hampton Roads Fishing Guide, Family Fun magazine, and Save The Bay magazine (Chesapeake Bay Foundation).